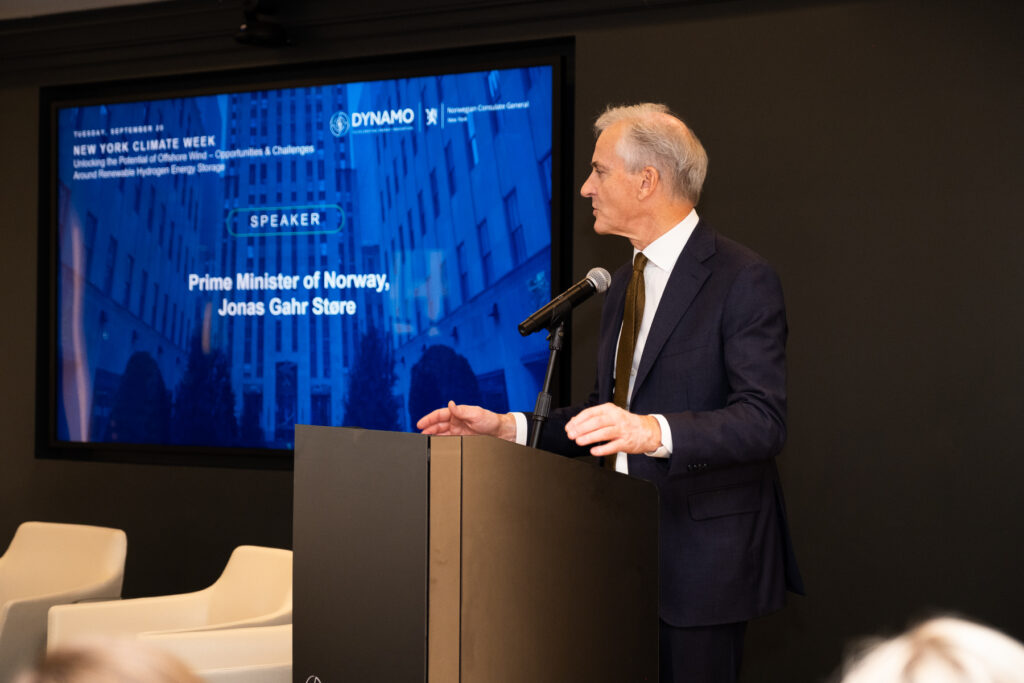 Dynamo Energy Hub’s September event ‘Unlocking the Potential of Offshore Wind – Opportunities & Challenges Around Renewable Hydrogen Energy Storage’ was co-hosted with the Royal Norwegian Consulate General in New York. Taking place during Climate Week NYC and the UN General Assembly, we were fortunate to have global and local political leaders, including the Prime Minister of Norway, as well as energy leaders in attendance.

Meade Harris, Co-Founder & CEO of Dynamo opened the event and highlighted Dynamo’s mission to be the future of work for the new energy economy.  “The pandemic has changed the way that we work forever. No one wants a 9-to-5 office anymore, but we do want human interactions that can only be found when we’re working together. That’s why Dynamo is building flexible co-working options in cool spaces and fantastic locations around the world.”

Prime Minister Jonas Gahr Støre began his keynote emphasizing Norway’s critical and shifting role in the global energy transition. Norway was previously the second biggest oil producer in Europe behind Russia, and has now become the largest as Europe moves to sharply reduce its reliance on Russian energy. He also shared Norway’s commitment to exporting 10% more gas this year over last year to help meet Europe’s energy demand this winter. “Paradoxically, Russia’s war with Europe is pushing the energy transition,” he said. “In Norway, we set the target to produce 30 gigawatts of energy from offshore wind by 2040. President Biden has a similar ambition of 30 gigawatts from offshore wind by 2030. We have the opportunity to build partnerships between Norway and the US on this. Our common goal is clear – we want to build a sustainable future.” 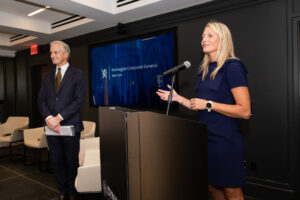 In the US, the Norwegian company Equinor is leading the development of four offshore wind developments in the Northeast, and plans to continue expanding. Domestically, Norway is already a leader in electrification, running on 99% of hydro-powered energy, and has now committed to electrifying all economic and industrial sectors. The Scandinavian nation has created a ‘7 pillar’ development strategy for decarbonization: hydrogen, offshore wind, carbon capture and storage, battery storage, greening power-intensive industries, and forestry.

Doreen Harris, CEO and President of NYSERDA reiterated the importance of international partnerships like the one with Dynamo and the Norwegian Government as well as federal and state level policies in helping New York State reach its goal of 9 gigawatts of offshore wind energy and reducing GHGs by 85% by 2050. She also shared that the same day “Governor Hochul issued a critical executive order, which looks at ways in which state operations can be made more sustainable. As agencies and as investors ourselves, [NYSERDA] very much needs to bring forward those changes.”

Both offshore wind and hydrogen are poised to grow in the coming decade. Currently, offshore wind produces about 50 gigawatts annually. This is projected to grow steadily until 2025 and then increase by 10 times until 2035, resulting in over 500 gigawatts annually. Fifty countries now have hydrogen strategies in place, and there will be $19 Billion in government investment in hydrogen next year. The public sector has a 70GW target for hydrogen electrolyzers by 2030, and the private sector is even more ambitious, planning for 200 GW within the same timeframe. These public and private initiatives, including the Inflation Reduction Act, will rapidly drive down the cost of hydrogen production, further assisting with scaling. His slides can be found here.

During the discussion, Equinor’s Molly Morris reiterated the Prime Minister’s sentiment – Equinor is proud to be able to increase production of natural gas to export to Europe by 10% this year given the volatile geopolitical and energy conditions at the moment. Going forward, the Norwegian energy company plans to maintain a three pillar strategy: to continue to be a producer of oil and gas globally in the lowest carbon way possible; to build a renewable business focused on offshore wind; and to focus on developing low carbon solutions including blue and green hydrogen hubs and carbon capture and storage solutions.

Amanda Dasch, the VP of Offshore Power for Shell in the Americas shared the company’s ambition to become a renewable energy company by 2050. Shell is heavily focused on scaling renewable solutions by leveraging their experience with investments, marketing building, technology and innovation. They currently have 19+ gigawatts of offshore wind capacity in operation and in development globally, and aim to be a leader in building the global hydrogen economy. Shell currently operates 10% of the global electrolyzer capacity, and is investing in new infrastructure that will become the largest electrolyzer in Europe, producing 200 megawatts in 2025.

Richard Voorberg of Siemens Energy shared that the energy company had recently split off from Siemens and will own 100% of Siemens Gamesa by the end of 2022. They’re prioritizing the transition to renewables: “Our traditional energy sources pay the bills today, but they’re funding the future of the energy transition. That’s what we’re excited about.” Siemens Energy is also focused on offshore wind development and building their hydrogen business in the US and Europe.

National Grid Ventures’ Will Hazelip, shared their new Northeast Clean Energy Vision. National Grid is planning for significant production of clean energy with offshore wind, electric transmission, storage and clean fuel, including a large focus on hydrogen. In partnership with RWE, they secured the largest lease in the New York Bight, and are actively developing over 3 GW of offshore wind. They’re also looking to use hydrogen for electricity production, updating legacy generation facilities to support the use of hydrogen, and integrating hydrogen into the mass distribution network thus creating significant sources of hydrogen demand.

The panelists also spoke to the importance of the Inflation Reduction Act. At this volatile time with a war and impending energy crisis in Europe, the IRA provides assurance for private companies to invest confidently in US infrastructure and supply chains.

Shell’s Amanda Dasch put it succinctly – “the most important word is ‘certainty.’ The State goals are translated into State law, as well as rules and regulations. This is critical so that the industry has the certainty it needs to make investments, and we have that here in New York.”

Olivia Breese reiterated this point,”It’s ‘certainty’ in an uncertain world that really sets the US apart at the moment.” She also pointed out that the IRA also offers the US an opportunity to build an export market. “The US has leapfrogged to the top of the global tables for the most efficient place to produce e-ammonia at scale. That also is going to further contribute to the investment, jobs, and supply chain development that we’re going to see increasingly across the US in the coming years.”

We hope to see you at our next event in October with CreditSuisse “Innovating in Bio-Based and Climate Tech Solutions” on October 6th! And don’t miss our Dynamo London Hub launch in conjunction with BloombergNEF‘s Summit London, ‘Climate Tech & Tonic.‘